Below is the English version of the email interview with Chris Beatrice, who wore many hats at Impressions Games – from General Manager and Art Director, Lead Designer to Project Lead. He has also founded his own studio, Tilted Mill Entertainment, which produced Caesar IV, Children of the Nile and SimCity Societies.

How would you describe the art style for Caesar 3? How was it decided? How much was a seemingly obvious continuation of the previous installments?

Of course I was not the art director on Caesar 3 (I had become Creative Director for the whole studio at that point). How would I describe it? In those days the company was still very much [Impressions Games Founder] David Lester’s child. Even though he was in the process of transitioning out, all of our successful games up to that point (with the exception of Robert E. Lee) were his games. His aesthetic was somewhat dry, realistic, bright, but historical. At that time the art tools were not what they are now, obviously. We had limited color palettes and lowish resolution. Mostly it was a struggle to get things to simply look good, immersive, engaging, and not to aim for a specific ‘style’.

For all these reasons, the art style for Caesar 3 was not something that grew from any kind of conscious, explicit direction. It was more an evolution of what Impressions had been trying to achieve for a while (and first did well in Caesar 2, imo, which is probably notable).

Deities function as absolute authorities whose wrath or joy yields specific punishments or bonusses – what was the reason for keeping this straightforward approach from the previous game, whereas many other areas had many changes?

Similar to what I noted above: I was not the designer on Caesar 3. That was David Lester (and programmer Simon Bradbury was responsible for a lot of the design as well).

Anything else you’ve always wanted to tell the world about Caesar 3? Things you wished you would have done but couldn’t or vice versa?

I took over Impressions fully during or right after Caesar 3. Pharaoh (sequel to  C3) was the first game I designed, though obviously its guts were C3 (and that is A LOT of why it’s fun). David Lester and Simon Bradbury found and created some real magic in C3, and that is the secret ingredient that, if present, makes up for everything else.  So to answer your question: I would have polished C3 more. Pharaoh was about 50% polishing and improving the magic of C3, and 50% new stuff.

In many way, Zeus is the ultimate (single-player) refinement of the City-Building series, with a clever tabbed interface, fewer walker issues and so on and so forth. But it also brings dramatic changes visually. Buildings don’t look as straightforward as before, colors get less earthy, animations more whimsical. How come?

CB: It seems funny looking back that we would take the series in a different direction visually, but you have to keep in mind that at the time PC games were in their childhood years. A lot of the genres that we have today didn’t even exist yet, and even the concept of ‘genres’ was in its formative years. All developers were trying to come up with new ideas, without having any idea what to call them or how to classify them.  Even the concept of a franchise or series was murky. We didn’t give the Impressions City-Building Series a name until we were well into it, like we didn’t yet understand the concept of a series.

When you hit paydirt (with something like the Caesar series), it was kind of bad form to simply iterate on that or repeat it. There was an expectation that you keep coming up with new games.  Looking back it seems crazy, because now, for example, if you have a winning formula for one franchise you really don’t need to do anything more than that. And maybe we were ‘worse’ than other developers at this, in that we didn’t do sequels until we felt we had something really new to deliver.  So given that Zeus was coming out only a year after Pharaoh, we felt we needed to do everything we could to make it its own game.

Some of the reasoning behind the visual direction, specifically, was that we were seeing how our previously ‘hardcore’ strategy games were being enjoyed by a much wider audience than was typical for that time (i.e. it included a lot of women and children). Now the gaming audience is pretty spread out, but then it was basically just guys, and for our games, generally, older guys (not teens or young adults).

Was it also in this reasoning that you decided to have colorful statues?

As noted above, the idea was to make the visuals more fun, less serious, with the justification that (as you’ve pointed out) painted statues are historical.  It’s a funny thing, as you’ve said yourself, that we see classical statues as white marble, and therefore painting them looks cheesy. It’s similar with castles: we see them as gray stone, even though they were generally whitewashed.

Whereas Caesar 3 invites you to “Build a Better Rome”, Zeus takes a more narrative approach – it’s right in the name after all. The gameplay brings deities and their enemies right on the screen, far from the abstract powers they used to be. Some depictions are a bit irreverent and as such actually match the more nuanced attitudes worshippers had back then too. Why did you take this approach?

Again, the core directive was to do something different relative to Pharaoh. The Greek pantheon of gods is hugely popular and well-known across the world (unlike the Egyptian gods), so we were able to capitalize on that familiarity and do something fun.

Between Caesar, Zeus (and Pharaoh and the Last Emperor), which approach towards representing ancient cultures, their beliefs and their architecture would you chose today?

It’s hard for me to give a generic answer to this because for me the specific culture affects it. For example, the Romans were city-planners, hence the Roman Empire setting is the basis of the Impressions City-Building Series. By contrast, the Egyptians only have one planned city, I believe (Amarna) which was an anomaly for several reasons. The Romans were conquerors and colonizers, and that’s why they developed the art of city planning. Ancient Egyptian culture was so wrapped up in the concept of Pharaoh as living god, that the game mechanic of having the entire city / civilization being bent toward the one goal of building the world’s greatest monument makes this setting unique. That is the one core gameplay aspect of Pharaoh I felt outstripped C3: there was a tangible, visible, engaging, satisfying POINT to building your city (where in C3 it was just ratings / metrics). And finally, as noted, with the ancient Greek setting we have the cultural treasure of the Greek pantheon of gods and their interactions and stories.

For me, ancient Egypt (Pharaoh, Children of the Nile) is the most compelling setting, but Zeus probably represented the most elegant gameplay system for a classic cb game.

Is there anything that then-existing technology prevented you from doing in any of the games with regards to gameplay or art style?

Well, being able to rotate and zoom the view would have been nice, though those don’t add much to gameplay they make the visuals more immersive. Also: resolution. When the game is based on tiny little figures walking around, it’s tough if their feet are only a couple of pixels tall. The challenge with cb games was always that we had lots and lots of separate things moving and changing, which is a different challenge than, say, having high-res textures and high poly models. All of these things have become much more easily surmountable with today’s tech.

Do you think it’s easier to go for a distinct art style in traditional 2D engines compared to 3D? Or is this is a problem that time has now solved, but hit City-builders the same way it hurt Adventures and RTS?

I don’t think it’s ‘easier’ to have a distinct art style in traditional 2D, but I do think for certain games it is more effective to go with 2D. 2D allows you to remain abstract. There is no illusion that you’re looking at a real thing, and that means you can prioritize and emphasize things for gameplay and user interfae reasons. Personally I prefer 2D. 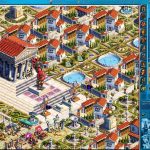